Back in 1975 Popular Mechanics did a review on the Wahl soldering iron in its original form. This review was a side by side comparison on how to solder without a plug, using the three other market leaders that were available at the time. They compared Wahl, Lenk Black and Decker and Ungar. Even though its been over 43 years, we are still very happy with the results. 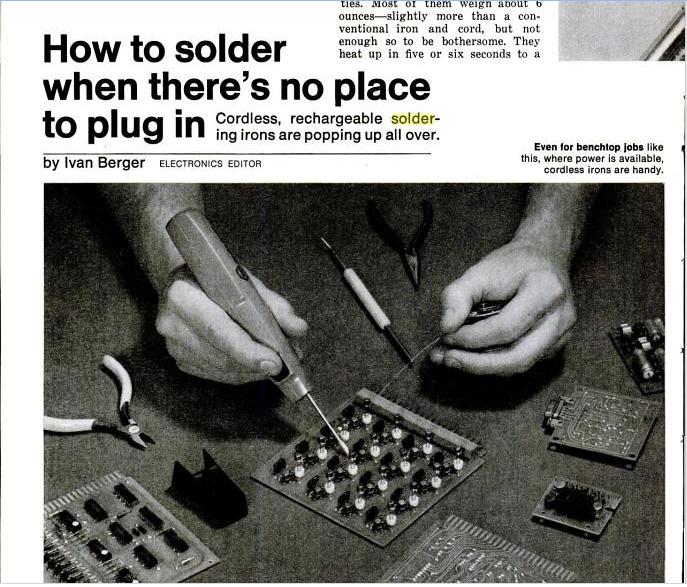 Their initial findings were simple, all of the irons were pencil shaped in design and had a incandescent bulb at the front to illuminate the work area. The first conclusion was that in all applications even at the work bench that the advantages of not dragging a cord behind your iron was a great innovation. This brought them to the battery talk.

This is where things start to show a clearly superior product. While most of the irons tested had a similar usage life as far is joints go, they were far from the same. The Wahl Iron came in at a 4 hour charge time while all others came as an “overnight” charge.

The next victory for Wahl was there tip selection. With the least damaging and highest selection of tips Wahl took yet another victory.

With an easy charging base, widest selection of high speed tips and a quick painless charge; Wahl won. They continue to praise and talk up the Wahl soldering iron through the remaining paragraphs of the article. We are proud to be able to say that all of this is still true. While somethings have changed such as our number of tips and the name it goes by the Wahl is still the best portable soldering iron available. If you don’t believe us just read the article. We’ve been hearing it far and wide since 1975.

If you’d like to read the article from the original issue of Popular Mechanics CLICK HERE. If you’d like a link to the best portable soldering irons available Click Here to see our full Line Up

Also, in case you didn’t know, Iso-Tip used to be manufactured by Wahl clipper. Get the full details on that story here.